The European Union’s Policy towards Africa
New Approaches and Perspectives

The German-language book is a result of the externally funded project “The European Union’s Policy towards Africa. New Approaches and Perspective”. It was financed by the Fritz-Thyssen-Stiftung. 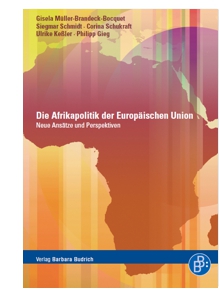 Since the middle of the 90s, the European Union’s relationship with the African continent has been caught in a fundamental change. Political elements such as observing Human Rights, Democratization, and Good Governance as well as Conflict Prevention, including Conflict Management have taken a central position in the EU’s Africa Policy.

After a detailed account of the over 40 year relationship of the EEC/EC/EU to Africa, the book analyses the most recent paradigm shifts under the key word “Politicization” and examines the quality of the EU as an actor in African Policy.  As a result the question of particular interest is if, and to what extent, the EU has moved itself into a position of effectively being able to contribute to the peaceful development of Africa through its structural reform and new political approaches.

The analyses of the African Policy of selected EU Member States (Germany, France, and Great Britain) examines the trend towards Europeanisation, and a look at US Africa Policy shines light on the significance of the continent in International Politics today.

“This book distinguishes itself through the length and quality of its chapters, which clearly rise above the level of a normal book volume. The easy reading in this case is not achieved through lower quality, but instead through the soundly written articles which know how to win the reader over.”

“All in all Gisela Müller-Brandeck-Bocquet and her co-authors have succeeded in presenting an in-depth Introduction into EU Africa Policy which Practitioners and Students alike can use perfectly as a book of reference. Furthermore, the book offers interested readers a range of conclusive possibilities which they can use for their own research.”

“[…] what role can the European Union play in Africa? German political scientist Gisela Müller-Brandeck-Bocquet and her co-authors have published a rich volume on this issue […]”