Which factors hinder the upswing in the Democratic Republic of the Congo? Academics from Würzburg and Kinshasa want to figure that out together. To kick off their project they met for a week in February at Würzburg University. 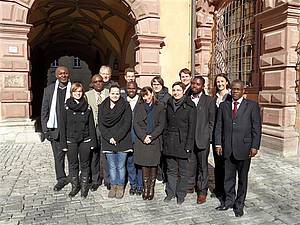 Despite its many natural resources - for example copper, gold, and diamonds - Congo’s economy is paralyzed.  To find out exactly why that is, academics from the Universities Würzburg and Kinshasa came together through an interdisciplinary project funded by the Federal Ministry of Education and Research.

Lawyers, Economists, Political Scientists, and Geographers alike take part in the project “Foundations for an Economic Upswing in Congo”.

A team from Würzburg University lead by Prof. Dr. Gisela Müller-Brandeck-Bocquet and Prof. Dr. Greg Basue who teaches and does research at the Universities Kinshasa (Democratic Republic of the Congo) and Valencia (Spain) represent the field of Political Science.

The beginning of the Project Week was celebrated on 21 February YEAR in the Senatssaal at Würzburg University. University Vice President Margarete Götz, Dean of the Faculty of Law Eric Hilgendorf, and the Mayor of Würzburg Adolf Bauer all gave welcoming speeches. Law Professor Jean-Michel Kumbu gave a summary of the project. 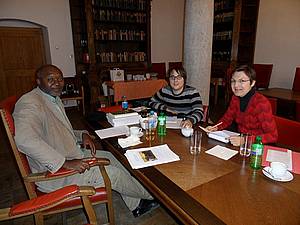 In the following days, the academics met for numerous discussions. Alexandra Vogel and Philipp Gieg from the Institute of Political Science and Sociology discussed with Prof. Basue about the current political problems as well as the possibilities for the Democratic Republic of the Congo.

Among other topics they spoke about the newest constitutional reforms from January 2011, the upcoming presidential elections, corruption, political culture and national identity, the conflict in Eastern Congo as well as the countries international relations. As a result, further research questions were identified and topics filtered out which require further analysis and suggestions for improvement.