Under the title “The Paris Agreement – Achievements and Shortcomings”, Indian guest professor and political scientist Prof. Sanjay Chaturvedi from Panjab University, Chandigarh, and climatologist Prof. Heiko Paeth from the University of Würzburg discussed their perspectives on the Agreement. The debate was organized by the IPS Indie Forum and was chaired by Prof. Gisela Müller-Brandeck-Bouquet, professor for European Studies and International Relations.

Prof. Heiko Paeth, who holds the Professorship for Physical Geography at the University of Würzburg, added a rather natural scientific perspective to the discussion. His opinion about the results reached in Paris last December was quite a pessimistic one: Besides unrealistic thresholds and unspecific aims he further criticized that the issue of decarbonization had not been covered adequately in the Agreement. For him, the results of Paris are a compromise that is too big to actually have impacts on the global climate. Or, as he put it himself: "The question is not, whether the glass is half empty of half full. For me, it is 90% empty."

The position of Prof. Chaturvedi was not as negative. Nevertheless, he described his reaction to the Paris Agreement "joy rather out of a sense of relief than of a sense of achievement": The consensus of 195 states about a common plan of action for the fight against climate change was a huge political and diplomatic success, but nonetheless Prof. Chaturvedi criticized that until today the Agreement had only been ratified by a relatively small number of states. Moreover, he deems most goals too ambitious to actually be achieved in the coming years. He painted a mixed picture of political success and shortcomings regarding the content of the Agreement. He praised, for example, the integration of the principle of common but shared responsibility in the Agreement, but expressed his concerns about the implementation of this principle and moreover criticized the insufficient covering of the issue of financing for developing countries.

After these opening statements, Prof. Müller-Brandeck-Bouquet opened the debate with a provocative statement: "The Paris Agreement has become a victim of climate reductionism á la Mike Hume." Prof. Chaturvedi partly agreed to this statement and furthermore pointed out, that climate change was on the brink of determining the political discourse. Preventing this was, in his opinion, an important task for social sciences. He stressed the demand for a bigger role of social sciences again when Prof. Müller-Brandeck-Bouquet introduced the issue of demography and population growth. The demographic consequences of climate change like climate flight led, as Prof. Chaturvedi pointed out, to a "securization" of climate change. In order to adequately integrate such aspects into the research on climate change, he suggested a "social natural science" and stressed the role of social sciences regarding a political solution for climate change. Another reason for the important role of social sciences was, as Prof. Müller-Brandeck-Bouquet put it, the fact that binding agreements have no chance to be signed by all states, while non-binding agreements simply do not impact the global climate strongly enough.

Among the questions from the audience was one that seems quite inevitable, keeping in mind the direction of the current debate on climate change: Is there still hope after this rather pessimistic view of the Paris Agreement? Will it be technology that saves us all and can climate change maybe be stopped through geo-engineering? Humankind has enough technological possibilities to reach the 2-degree-goal of Paris even today, explained Prof. Heiko Paeth, and expressed his skepticism about geo-engineering. The only hope the world had was a rethinking regarding climate change. Prof. Chaturvedi affirmed this idea and added that especially a paradigm shift regarding the issue of development was needed. This paradigm shift would come soon, noted Prof. Paeth: "Climate change will hurt those used to be on the winners´side – the developed countries. And with this, a shift in paradigm will come quickly."

Prof. Müller-Brandeck-Bouquet, too, picked up this spark of hope: After one and a half hours of lively debate she ended the event with the words: "Stay positive!" 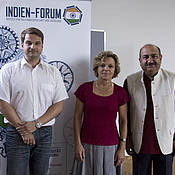 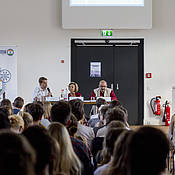 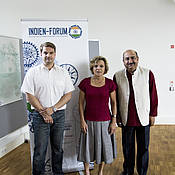 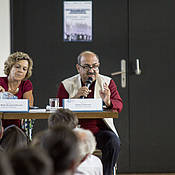 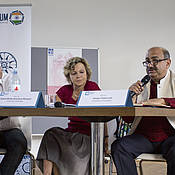 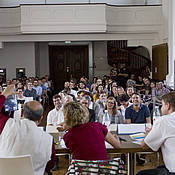 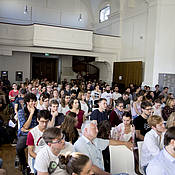 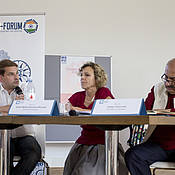 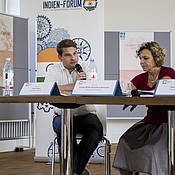 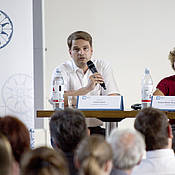 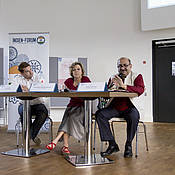 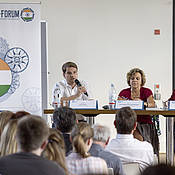 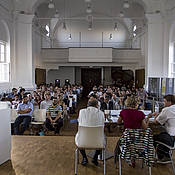 The India Forum's activities are supported by
the German Academic Exchange Service (DAAD) with funds from
the Federal Ministry of Education and Research (BMBF).